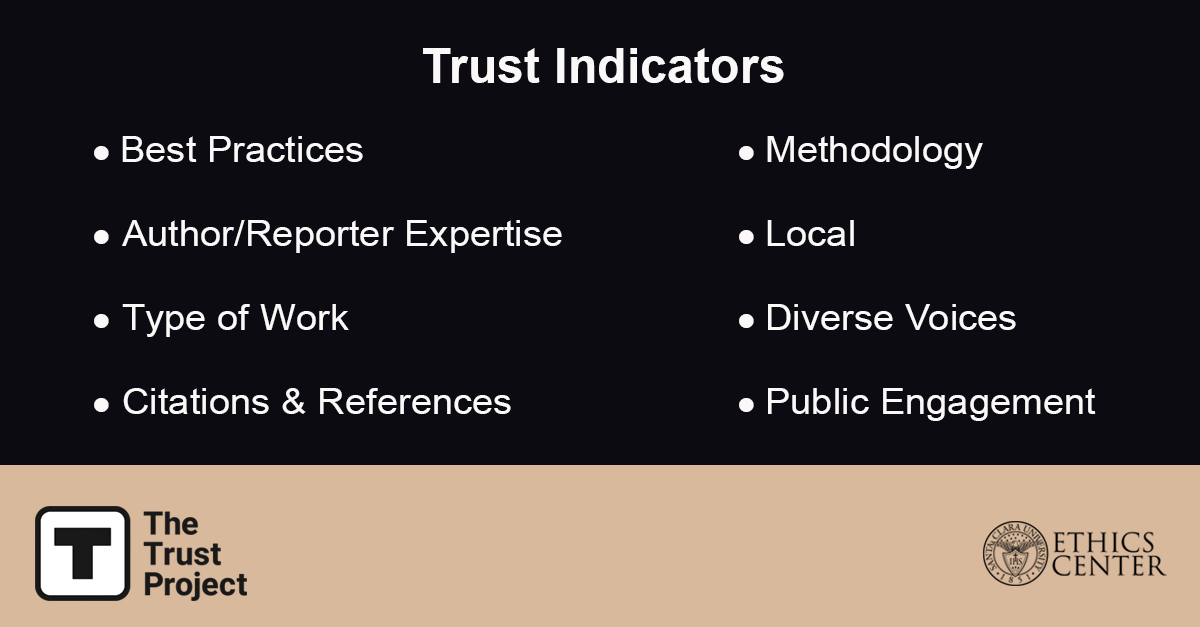 Do the Trust Indicators make a difference? Research by Reach Plc has found yes.

Dozens of news sites around the globe published the first Trust Indicators nearly a year ago and many more sites are in the process of implementing them. It’s clear from the research by Reach Plc (formerly Trinity Mirror) and an experiment at The University of Texas at Austin’s Center for Media Engagement that their efforts are having an impact.

Over two user surveys, our news partner Reach Plc found that the Trust Indicators increased readers’ trust in their publication the Mirror by 8 percent, a statistically significant difference in user perceptions. Their publication already had high levels of trust before they began working with the Trust Project. After surveying a representative sample before and after the launch, the Mirror found that user trust improved even more.

The Trust Indicators enhanced user perceptions that the Mirror journalists are trustworthy (by 9 percent), and that they are honest about the sources behind their stories (by 10 percent). The Mirror also saw a 5 percent increase in the number of people who said that the site is a trustworthy source of news, and that it “separates news from opinion.”

Andrew Tenzer, head of group insight at Reach Plc, outlines the findings in this new report.

In an experiment with more than 1,100 U.S. residents, the Center for Media Engagement compared survey responses from those who saw news articles with Trust Indicators and those who saw the same articles without them. Those who saw the Trust Indicators gave higher evaluations of a news organization’s reputation, including its trustworthiness and reliability. The indicators also were associated with higher evaluations of the reporter who wrote the news article and increased the likelihood of user interest in seeking out more news from that site. When people saw an article with Trust Indicators, they were significantly less likely to say that a news organization was “fake news.”

All these differences in perception were statistically significant.

The center’s study did not pinpoint the effects of individual Trust Indicators, which include disclosures about ethics, corrections policies and inclusive reporting, information about the author’s expertise, whether a piece is news or opinion, and more. The overall study findings, however, suggest that as newsrooms increase their transparency through use of the Trust Indicators, an increase in trust is likely to follow.