Our MVP launch scheduled for May 2019

We have the dual mission of reflecting on the digital divide and creating tools and techniques to identify and promote reliable and quality journalism on the internet. 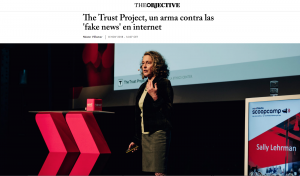 Photo: Sally Lehrman –  Reproduction of the Spanish site The Objective

How to change algorithms to make them detect quality journalism

In an interview to The Objective, which despite its English name is based in Spain and published in Spanish, Sally Lehrman explained the origins of the Trust Project as a strategy to fight digital misinformation.

According to her, “there has always been deliberate efforts to use something that resembles journalism to distort perceptions.” In addition, the digital economy dictated by the need for clicks and controlled by algorithms has worked to reduce the trust in the media.

Based on this diagnosis, Lehrman developed the concept of the Trust Indicators: “If the algorithm [of platforms like Google and Facebook] is pushing us to adopt the worst behavior, can we not change the algorithm so that it will push us to adopt the best behavior? Then I talked to some people in the tech world and they said, ‘Yeah, of course, you just have to define whatever the algorithm looks for and then to have [the] platforms using the same algorithm.’”

The Trust Indicators system was born, encoding in a clear and friendly way the editorial values ​​and practices of newsrooms. The indicators are published together with the news vehicles’ content both on their own websites and on social networks.

LSE report recommends the creation of an agency for digital information 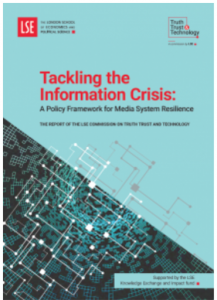 Completing a year of work, a task force commissioned by the London School of Economics (LSE) has published the report Tackling the Information Crisis: A Policy Framework for Media System Resilience.

The report main proposal is the creation of the Independent Agency of Platforms, or IPA, which would have the role of evaluating the effectiveness of platforms’ self-regulatory policies, as well as the quality of digital journalism. IPA would report to the British Parliament and offer policy advice on the sector.

The report also proposes that the agency be financed by a new levy on social media platforms, as well as funding from the advertising sector. Also according to the report, IPA would be a permanent forum for monitoring and reviewing the behavior of digital platforms, producing annual studies on “the state of disinformation.”

A new FT tool warns if articles quote too many men

According to The Guardian, the British newspaper Financial Times has developed a bot to encourage its journalists to seek more female sources for reporting and analysis. The technological novelty was created after the media organization concluded that only 21% of the people mentioned by the FT were women. The bot analyzes pronouns and the genre of first names to determine whether a source is male or female.

FT editors are warned when articles under their responsibility are not following the newspaper policies on diversity of voices. According to the Guardian, “the paper, which covers many male-dominated industries, is keen to attract more women readers, with its research suggesting they are put off by articles that rely heavily on quotes from men.”